skip to main | skip to sidebar

...are just about the best snack food and Chocolate Covered Katie is giving them away!!

Check it our here. There are separate links to enter for bloggers and for non-bloggers and ways to get more entries. I'm all over it!!!!
Posted by The Clumzy Cook at 8:34 PM 2 comments:

...and it'll be a while longer before another food post.

I am busy and it's hot here and I've had too little sleep and no time to cook so I'm cranky...and so on.

The good news -- giveaway at The Voracious Vegan. TofiXpress!!!

My favorite kind of give-away:

*sigh I've been wanting to try NuNaturals stevia for ever, but I never (not true!) win these! Maybe this time my luck changes.   =]

Go to Love Veggies and Yoga to try your luck and screw up my odds.   :D
Posted by The Clumzy Cook at 8:14 PM 3 comments:

Leisure time around the oven

I've been on a mini vacation the last several days and had more time to tinker with foods and recipes, which, now I see, explains why every time I'm off work I gain weight.

That aside, it was a delicious extended weekend! I made goodies galore! Here are some of the highlights:

For breakfast, I made a rice wrap banana "burrito." I cut up a banana diagonally, filled it with my favorite things -- chocolate, coconut, honey -- wrapped it in a rice wrap and sauteed in a pan for a couple of minutes on each side. I covered it with more choco-coco and gobbled it up! Pretty good and gooey. 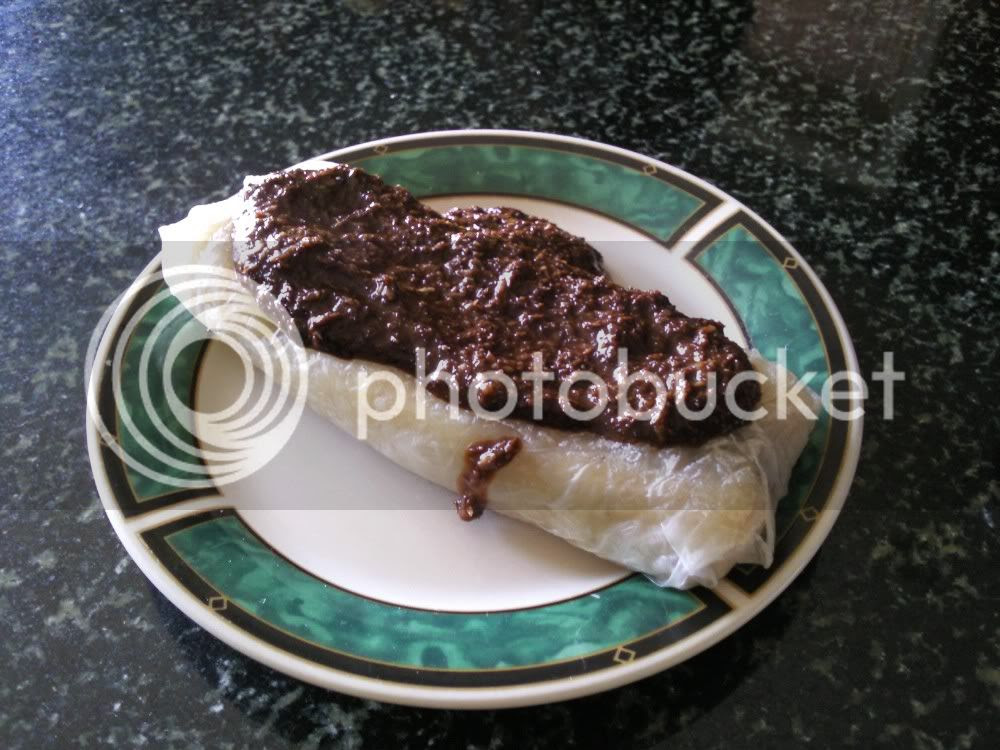 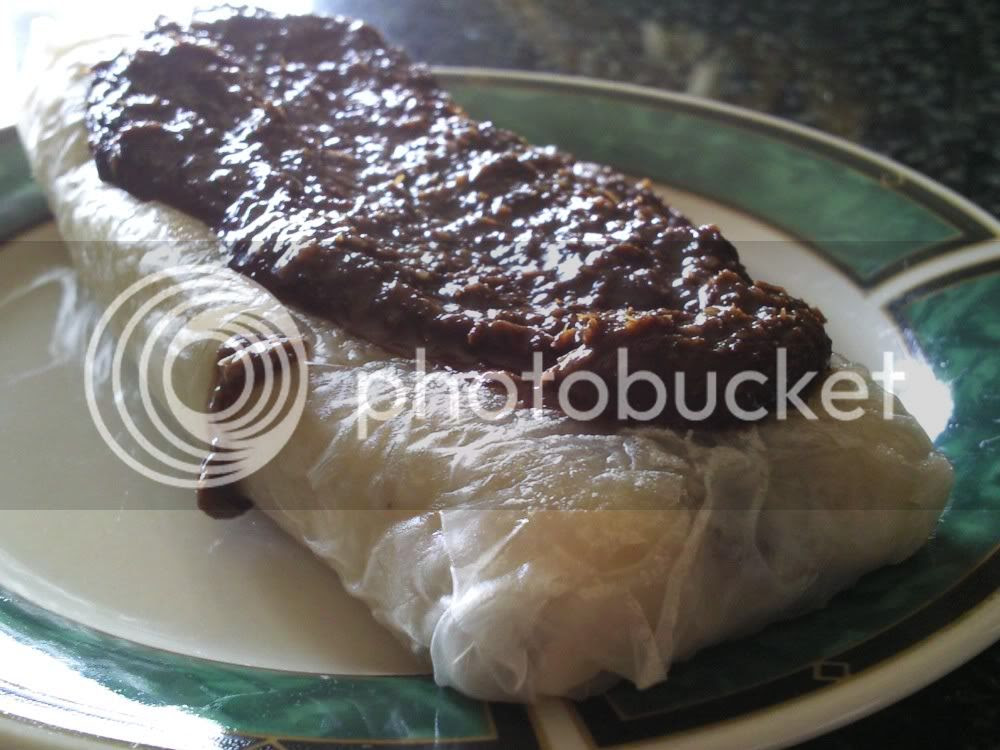 French (whole wheat) couscous with Cajun hot sauce and sauteed veggies (tomatoes, green peppers, mushrooms, spinach) on top, alongside some muffaletta olive salad, was next on the daily menu. 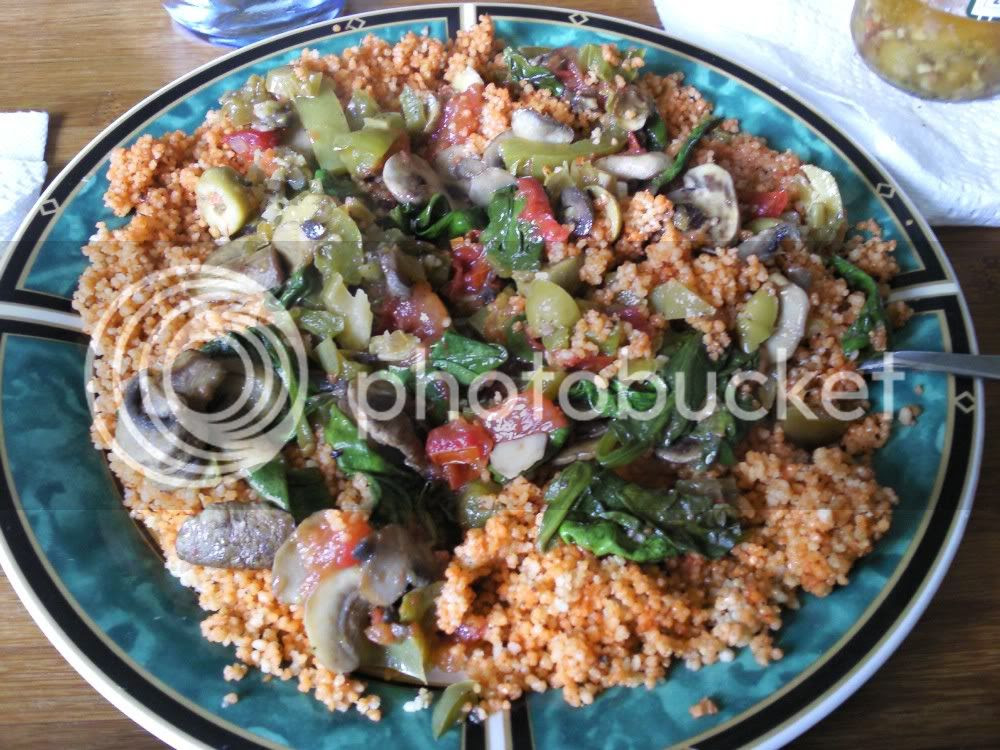 The couscous is highly recommended!! 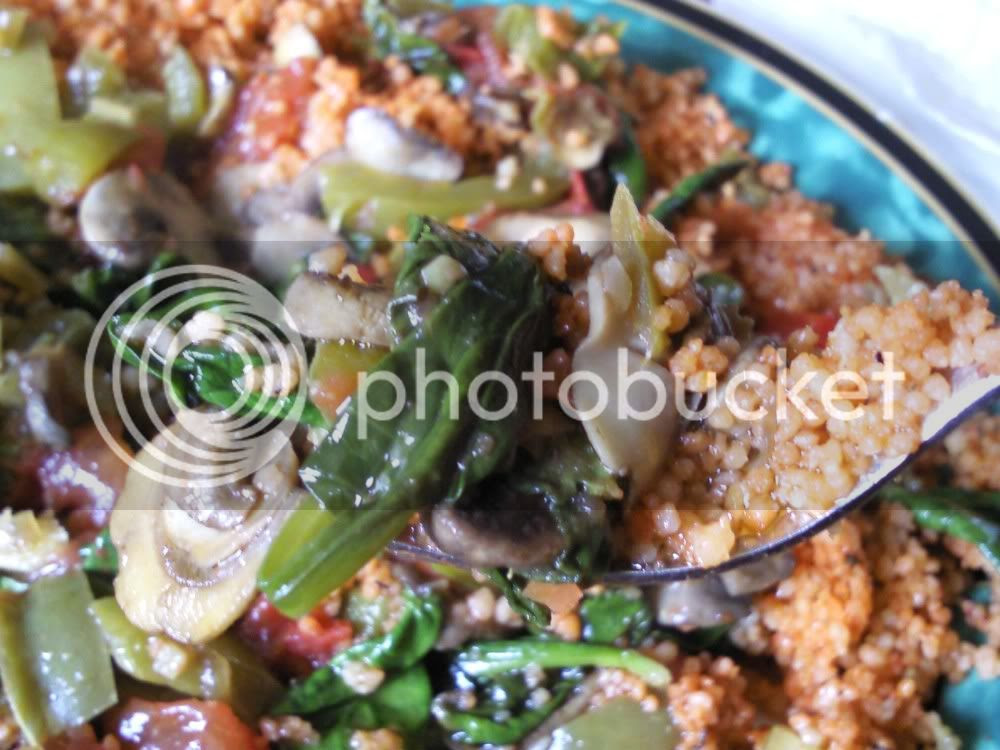 And I made an attempt at home-made turtles, but the caramel sauce didn't hold together well. I veganized a recipe that sounded and looked so finger-licking good, but alas!...
Here they are (they were still very much edible!): 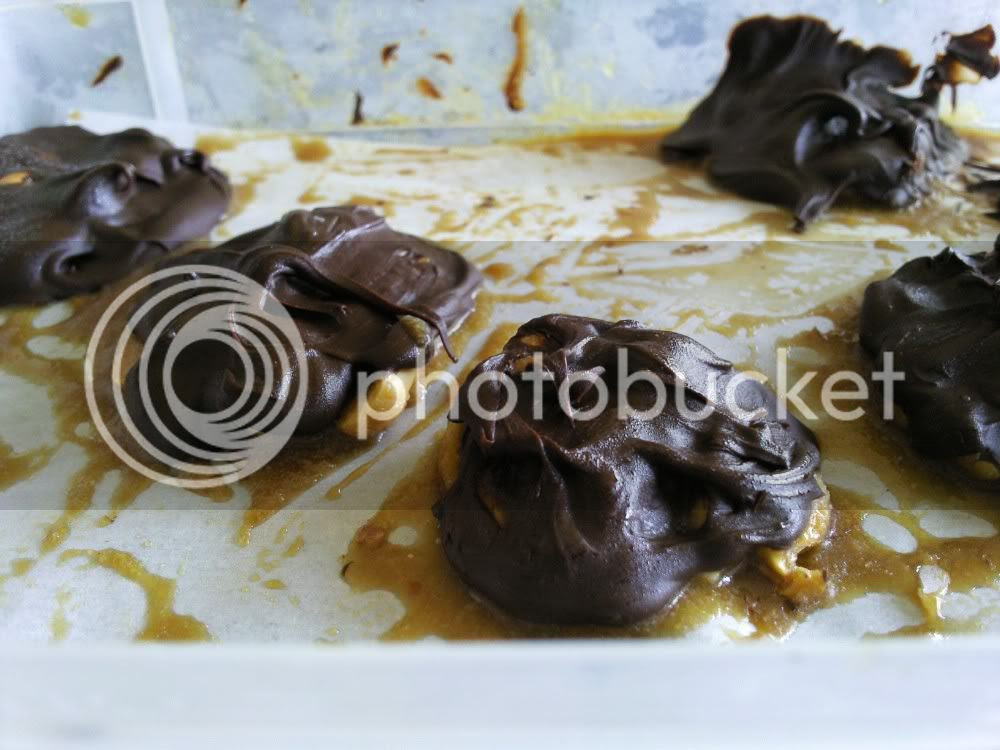 I used peanuts
Here's the caramel recipe, if anyone would like to give a try - and if it doesn't separate, please let me know what you did and how many virgins I have to sacrifice to the volcano gods! (just kidding; everyone knows they're only demi-gods):


Mix the first 4 ingredients over medium low heat, 5 to 7 minutes until thicker. Add vanilla and cook another minute. Refrigerate in a jar until cold.

If you make it work as a vegan recipe, I'd be very interested in hearing about it.
Posted by The Clumzy Cook at 7:06 PM 1 comment:

By "easy dishes" I'm talking minimal prep on my side, and heavy processing on the production side. I know. Not good. But, unfortunately, on those busy or lazy days, very convenient. Here's an example each of an "easy dish" for breakfast and another one for lunch. I'd like to preface the rest of this post by saying I did not eat them on the same day.   =]   In fact, they were weeks apart! Ha. As if that makes me less of a food slob.

If I buy soyrizo, a vegan, gluten-free chorizo substitute that actually taste remarkably similar to the real thing, I often don't know what to do with it. But I was curious to try it at first, and later discovered I liked the taste, only to realize it's not an item I can find much use for in my kitchen. So, several weekends ago, as I was warming up corned beef hash for my husband (I know!!! he loves it, though; he's not exactly focused on the "healthy" as much as the "tasty" part when it comes to food), and I had a ton of potatoes that needed a purpose in life, I thought -- why not make soyrizo hash! 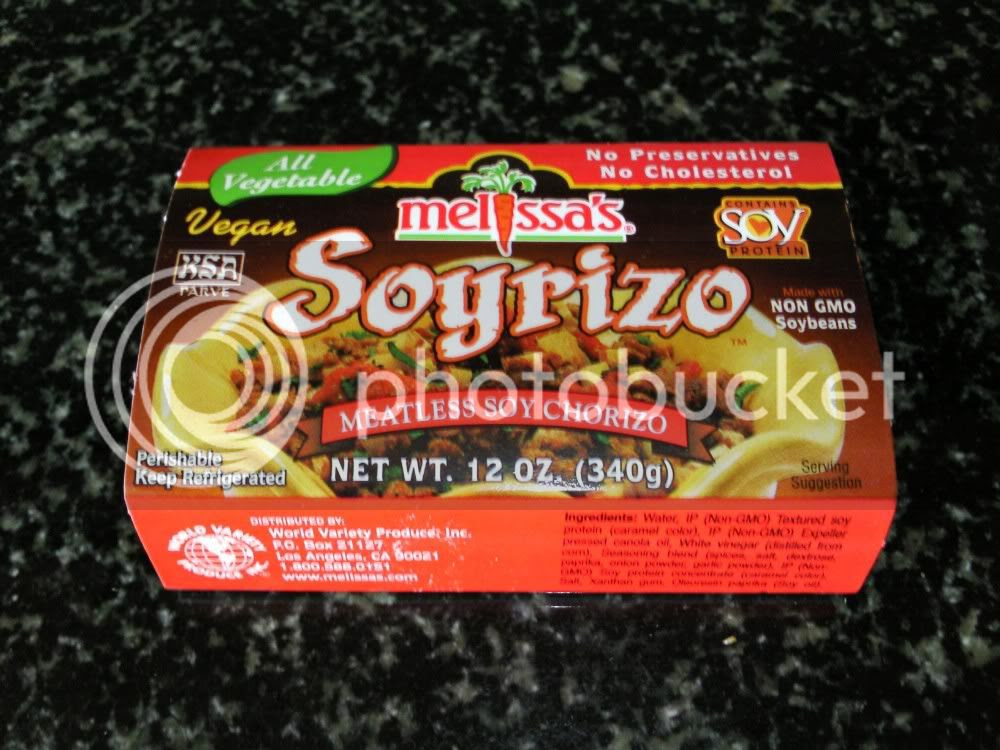 There are at least 3 different types of it that I know, but this time I bought Melissa's
Mine and my husband's dishes side-by-side: 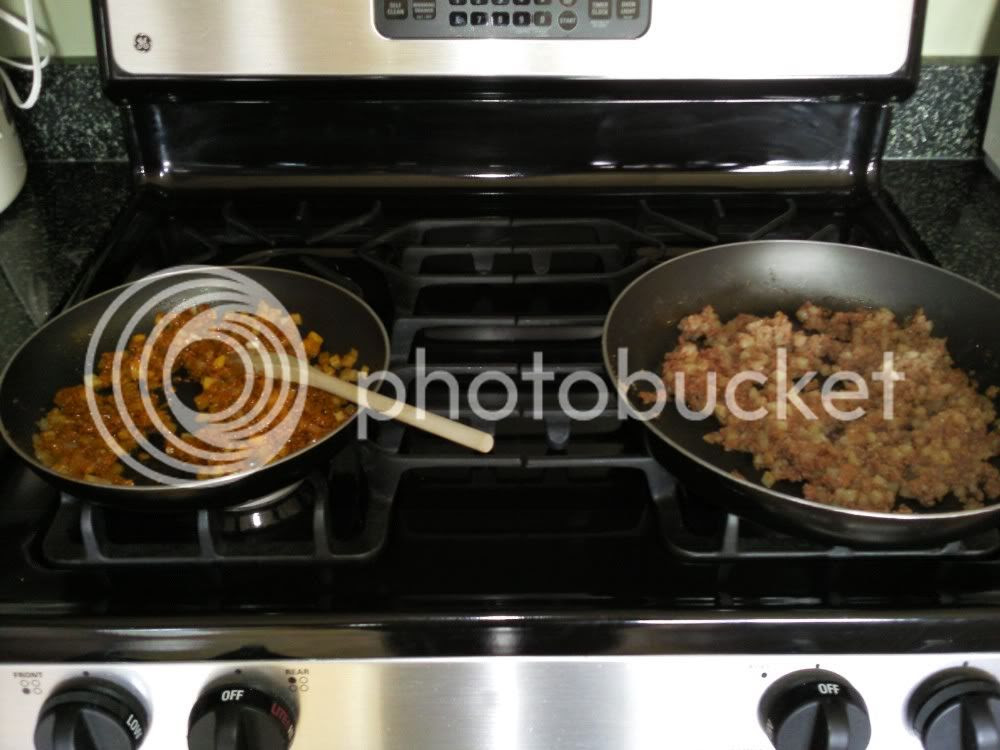 Mine is on the left. All I did was cut up a potato into really small cubes, added an equal amount of the faux-sage, and cooked until the potatoes were soft and soyrizo browned, as suggested by the packaging. It was very good! And if you "stomach" eating protein and starch with no adverse effects, by all means -- do it! Close-up
The second ready-in-a-snap dish I ate some weeks later was boxed gluten-free vegan mac-and-cheese and canned vegan chili. Easy as...well, definitely not pie, cause that's hard to make -- but this was a breeze to get ready. Make the macaroni per directions, takes something like 5 minutes, open can, heat chili, pour over noodles -- eat. A snap! I also opened another can (oh, the hard work of a cook!) of fire-roasted diced tomatoes with garlic and plopped them on top. For color and veggie requirement. 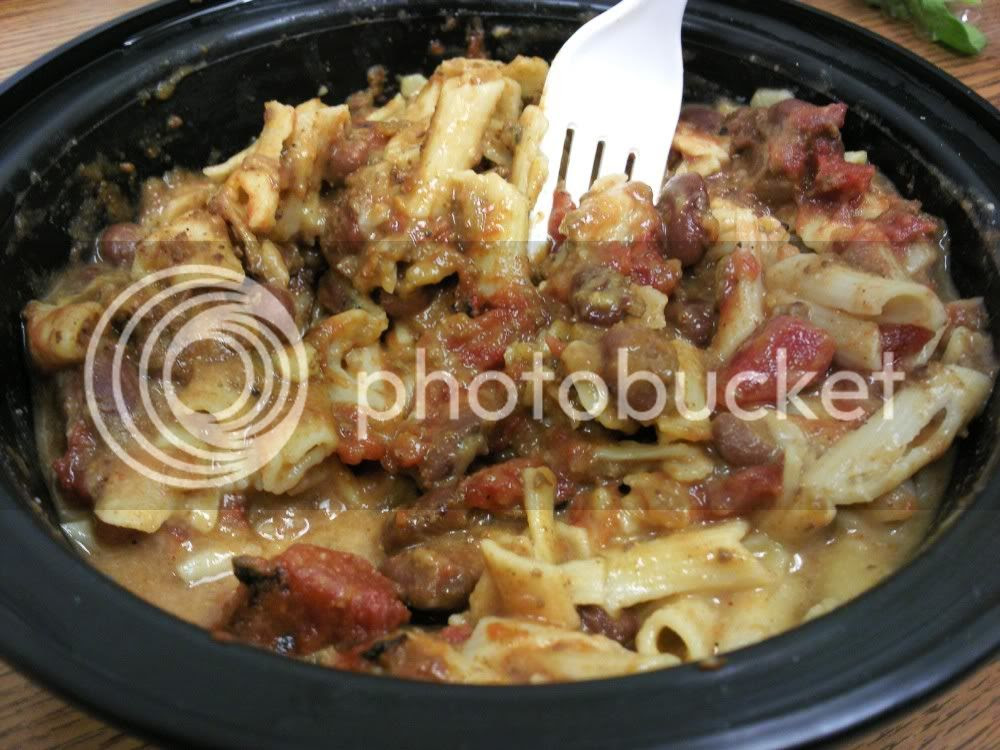 Add a salad if you feel guilty about all the processing. 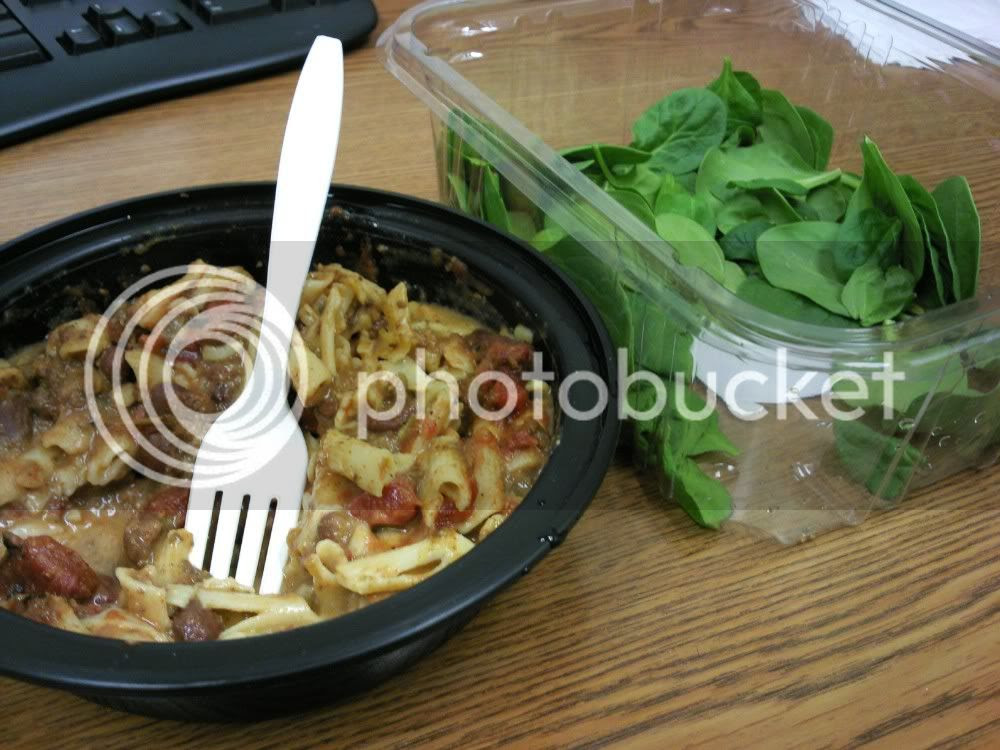 I was too lazy to cook this week so I got one of my favorite take-outs for lunch -- Vegetable Delight from a place called Thai Spoon.
As the menu says, it's a dish full of stir-fried "mixed vegetables including peapods, broccoli, carrots, baby corn, mushrooms, bean sprouts, green pepper, napa, and onions served over rice." Very tasty and I always substitute brown rice for regular. Check out these pictures and tell me you're not drooling: 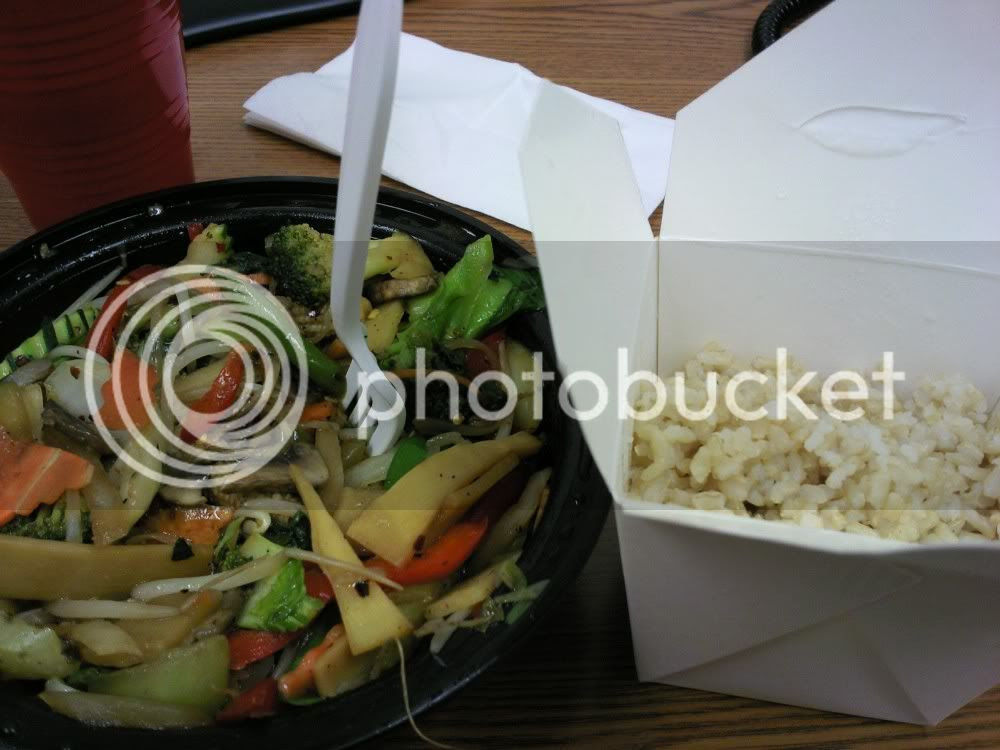 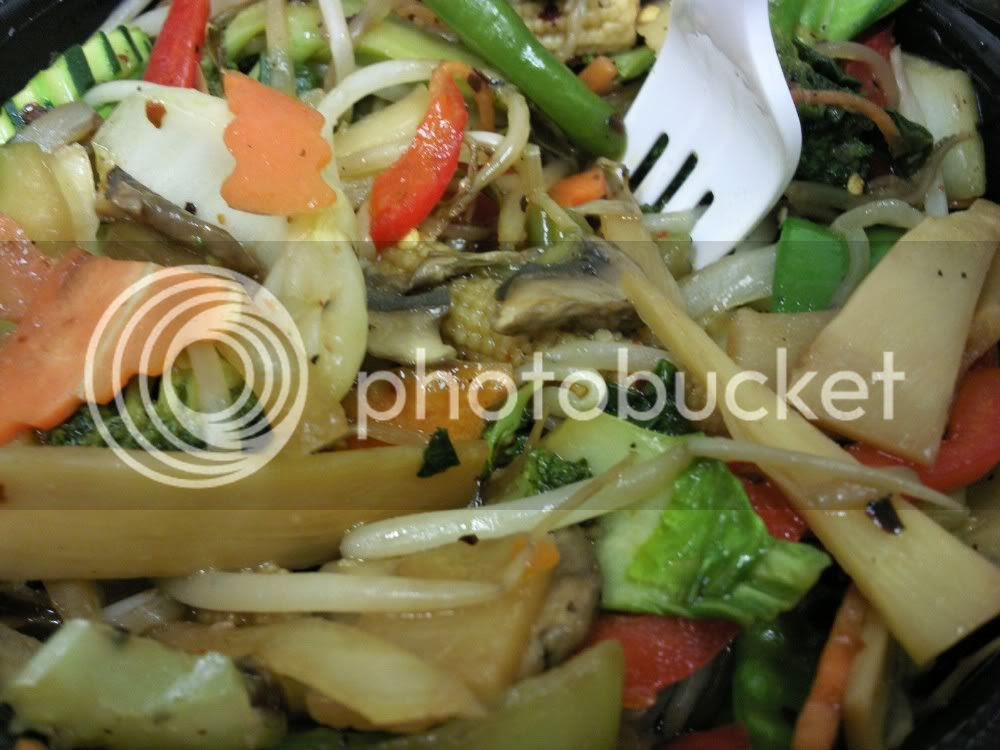 I got the "large"  =]
I'll be back with regularly scheduled programing next post.
Posted by The Clumzy Cook at 6:23 PM 1 comment:

Yeah, tooting my own horn there, but what can I say -- it was delish! 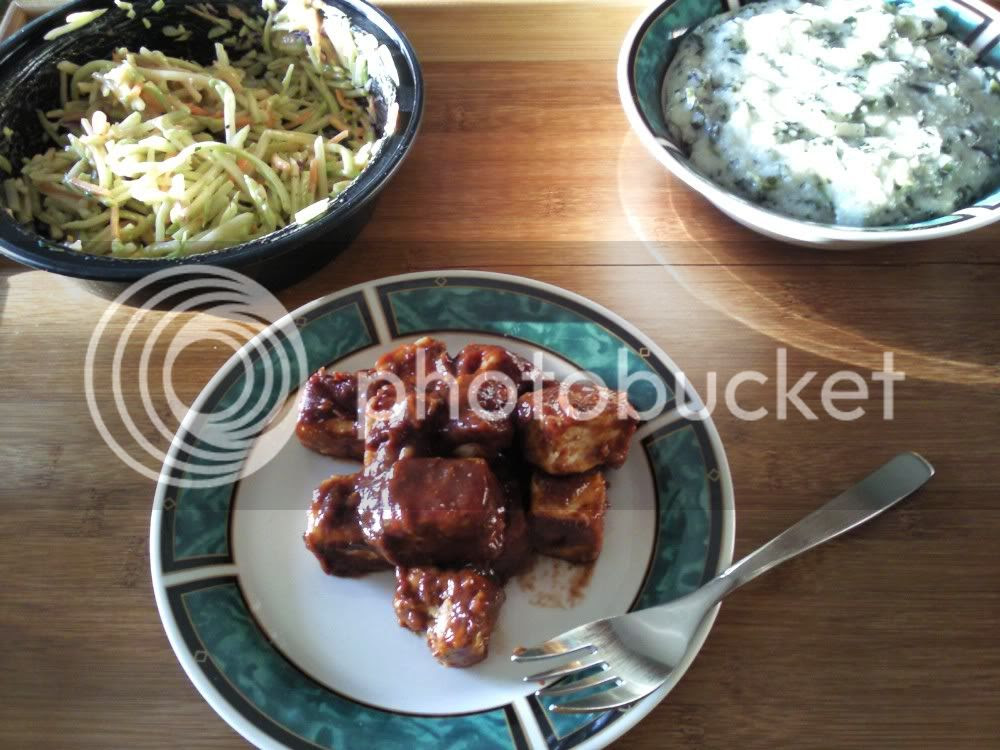 Close-up, mmmmm...
Cut up tofu into 1/2 in cubes and bake them in the oven at 350F for 15-20min. After that, roll them in some oil and flour/salt mixture and saute on the stove for a couple of minutes, and then add your choice of bbq sauce. I always make mine from just about scratch, but any will do. I mix tomato sauce with some ground garlic and onion, pepper, celery salt, cloves, chili powder, some apple cider vinegar, tamarind extract, tamari, paprika, cayenne pepper, mustard powder, any kind of sweetener, and a little bit of hot sauce. Cook on the stove till barbecue-brown.  =]
For grits, boil water and salt, add hominy and cook for several minutes. Just before done, add vegan cheese (I used Teese Mozzarella vegan cheese) and as much frozen spinach as you'd like; cook until the cheese melts and DONE! 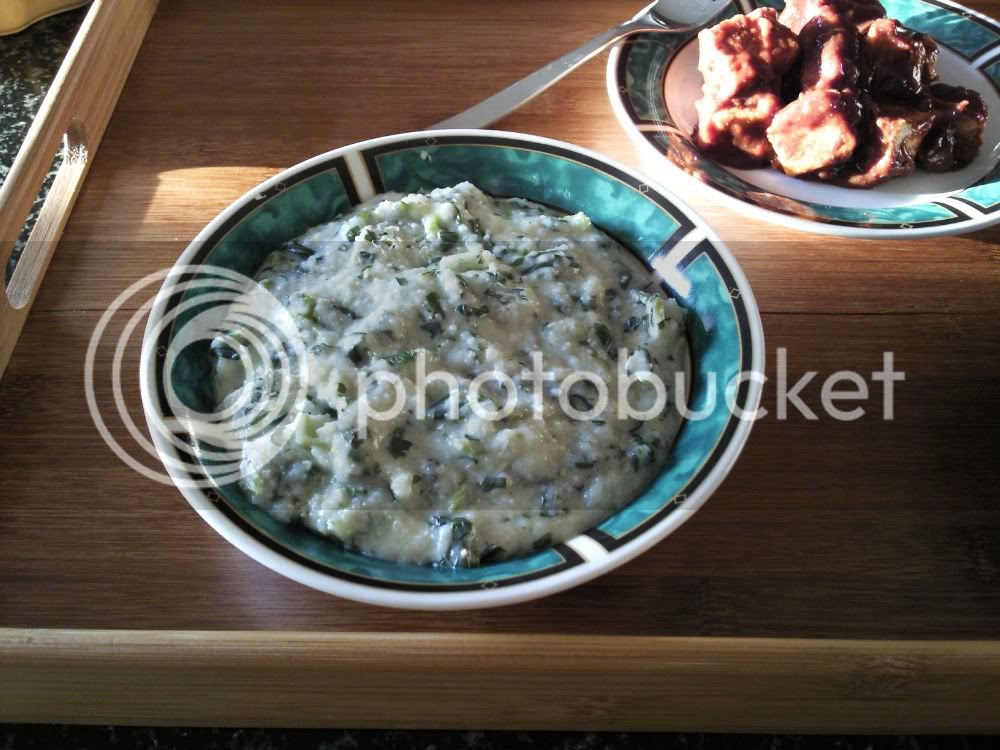 The slaw was shredded broccoli, red cabbage and carrot with vegan slaw dressing I adopted from Love Veggies and Yoga. Just use any vegan mayo (Spectrum canola oil one for me) and vinegar (I used the apple cider one) in the 1/3 - 1/2 of the mayo amount and I also added some hot sauce, to taste. I love me some hot sauce!! 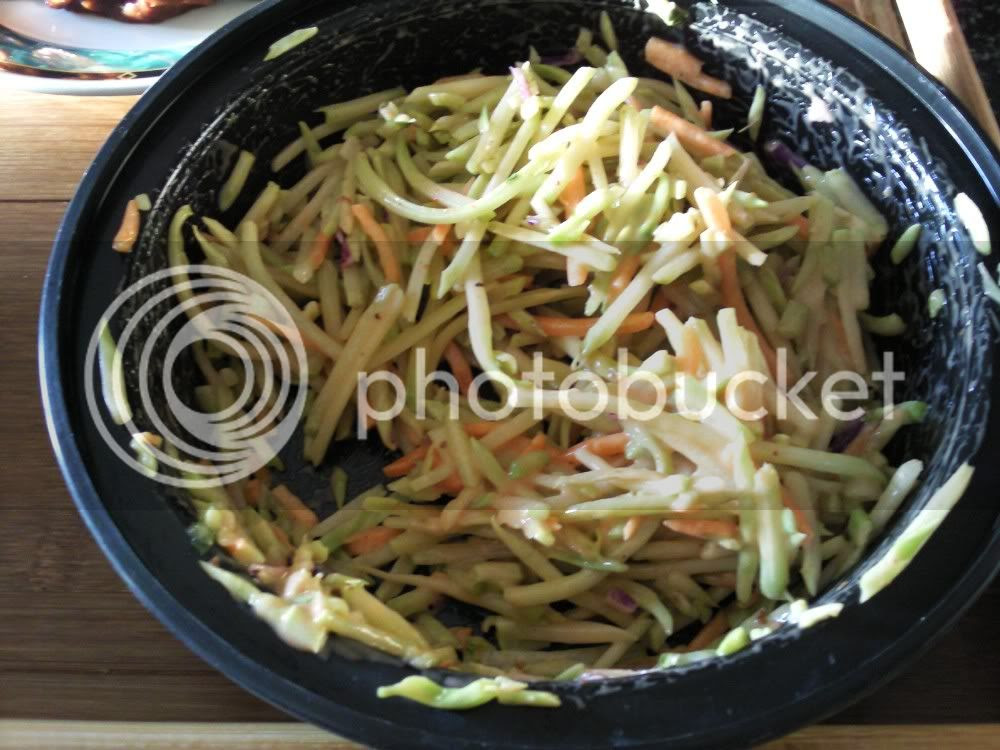 It was a marvelous meal! I liked it so much I had it again the next day, but I was out of broccoli slaw so I just used my dressing on a regular ol' salad of baby greens and baby carrots. 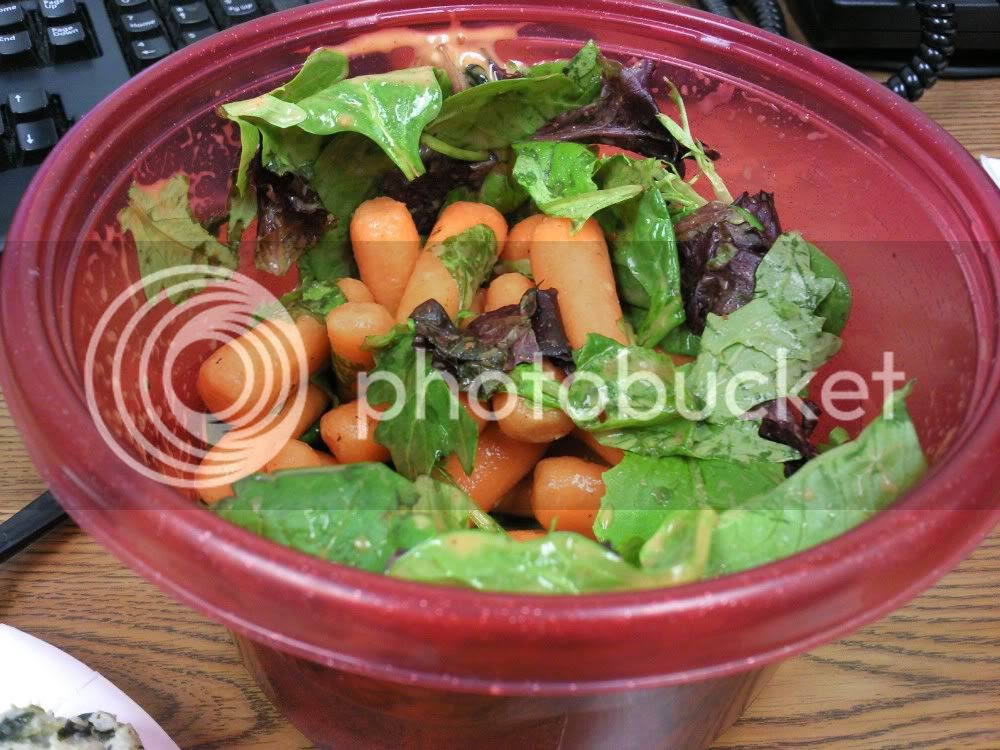 For dessert, I made a no-bake kumquat pie. It was...interesting. In fact, it still is since I haven't finished it yet. I didn't fall in love with it mostly because of a really strong soy taste. The recipe calls for whipped cream, sweetened condensed milk and kumquat puree. I pureed the fruit in a blender with no problems, and I made a coconut whipped cream lickety-split, but the third ingredient was the troublesome one.

I have some powdered soy milk, and I'm not crazy about the taste of it, and you can only imagine how the taste was intensified when I had to use three time as much to make it condensed.  =\ Blegh. The rest of the stuff in the pie, including the whole wheat crust help the taste somewhat, but this is one recipe I won't be making again until I find another way of condensing vegan milk.

I keep the pie in the freezer. 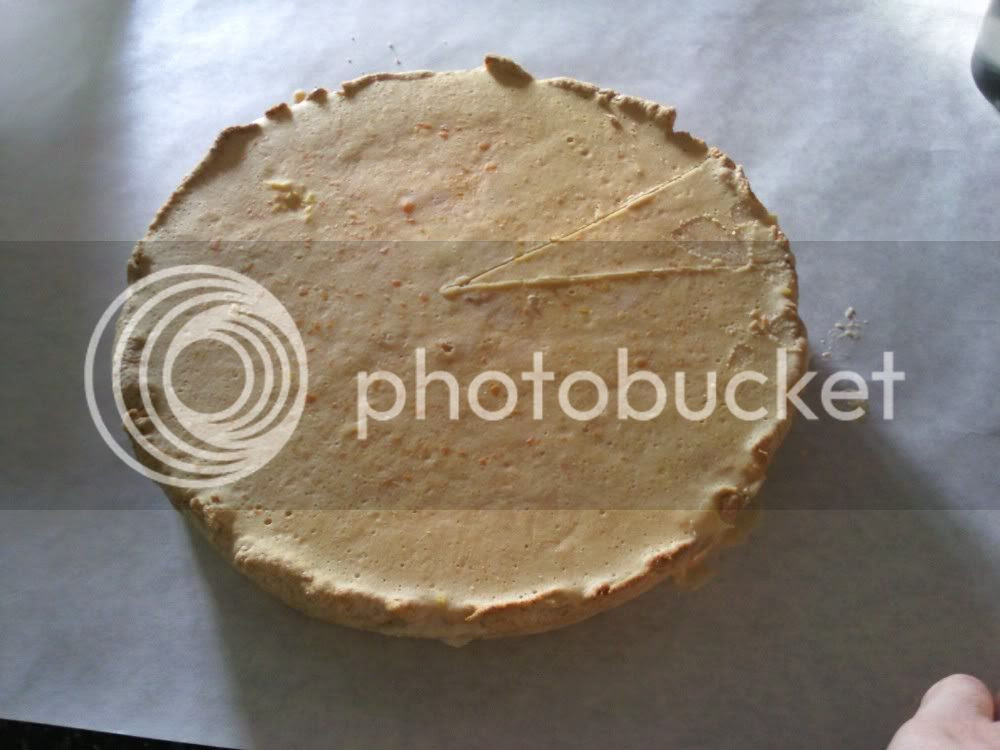 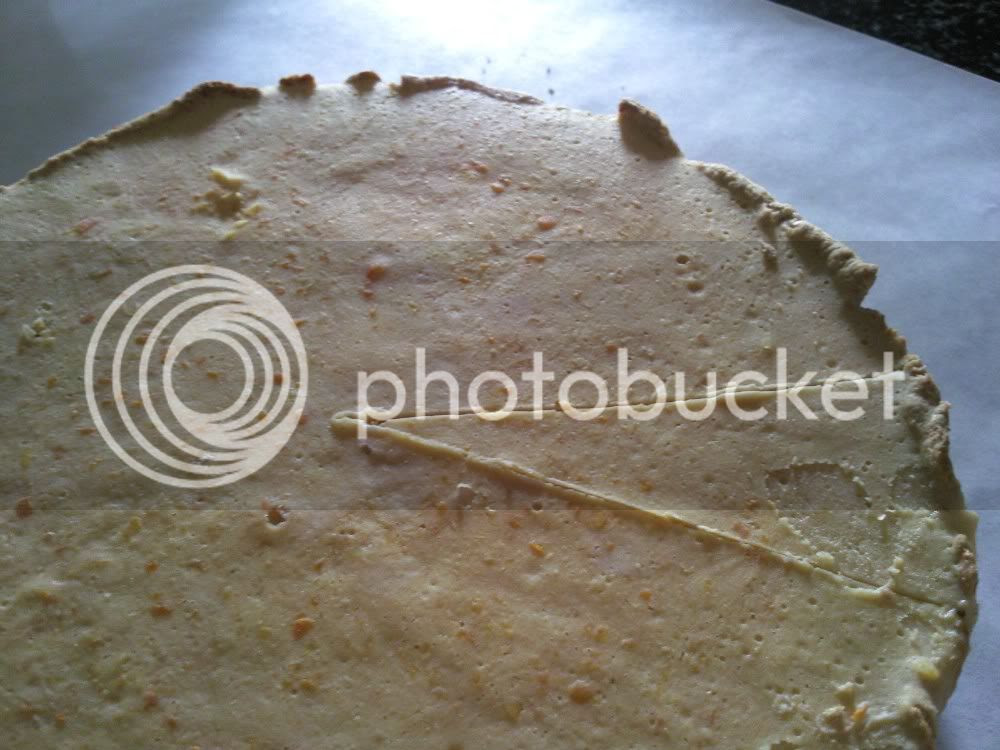 The crust was pretty yummy: 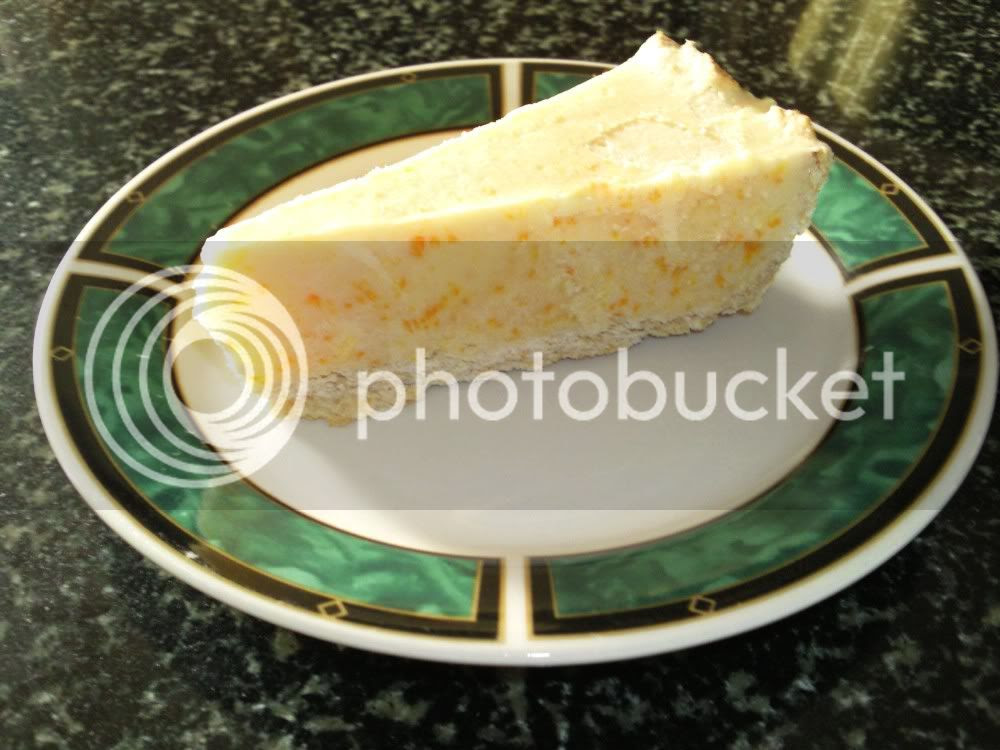 Here's pictures of the wonderful coconut whipped cream as I was making it (and, ahem! eating it). 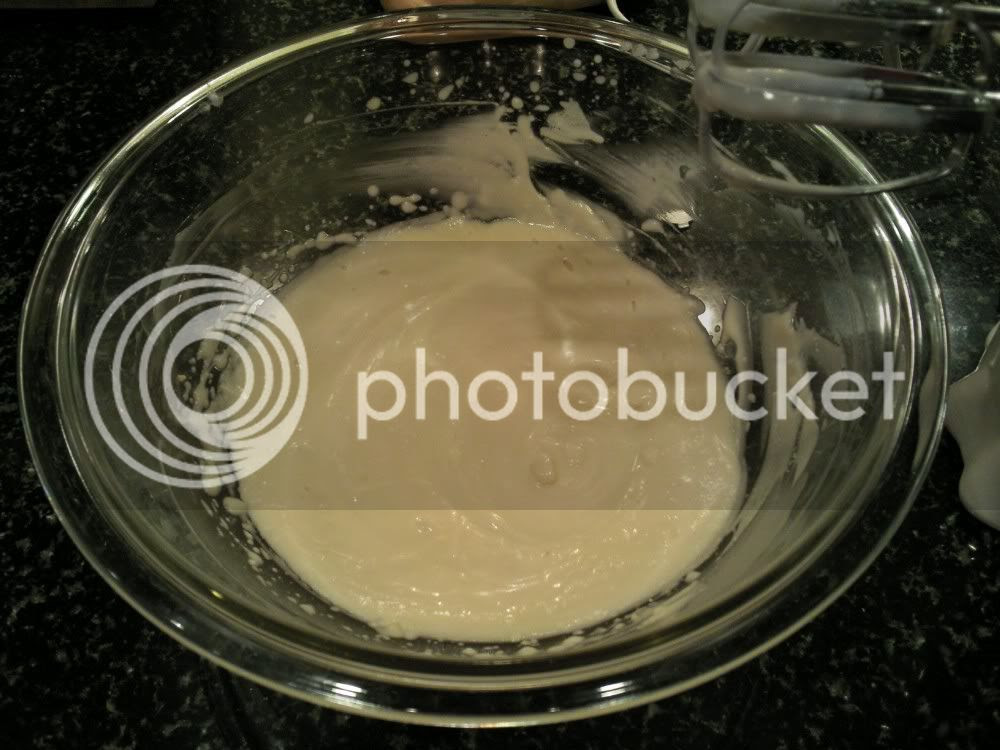 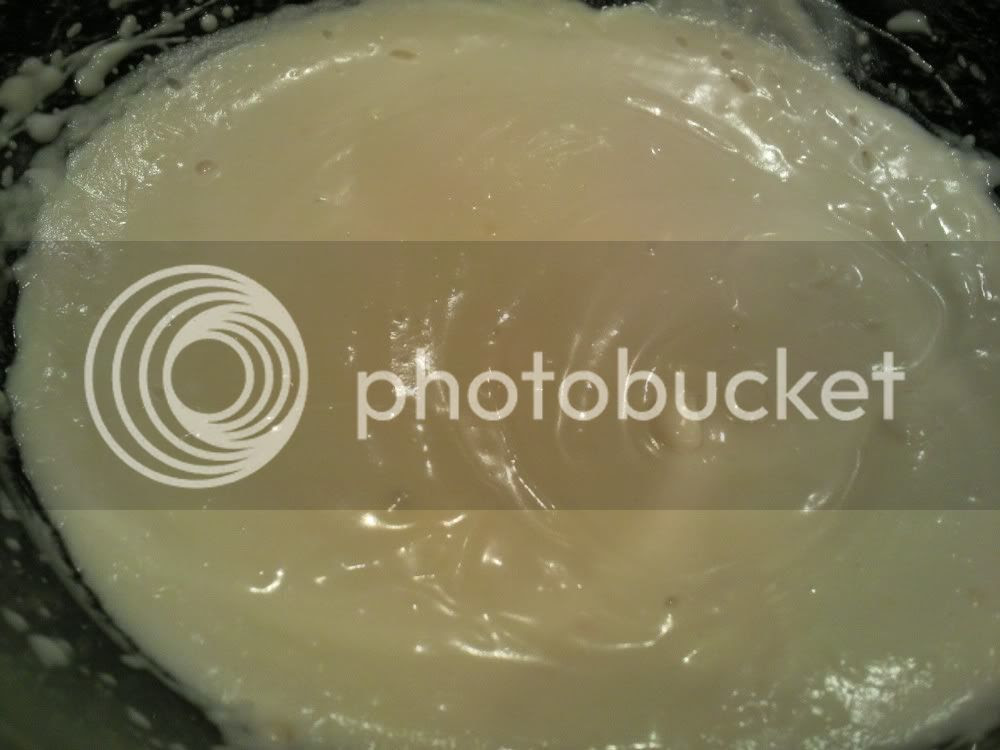 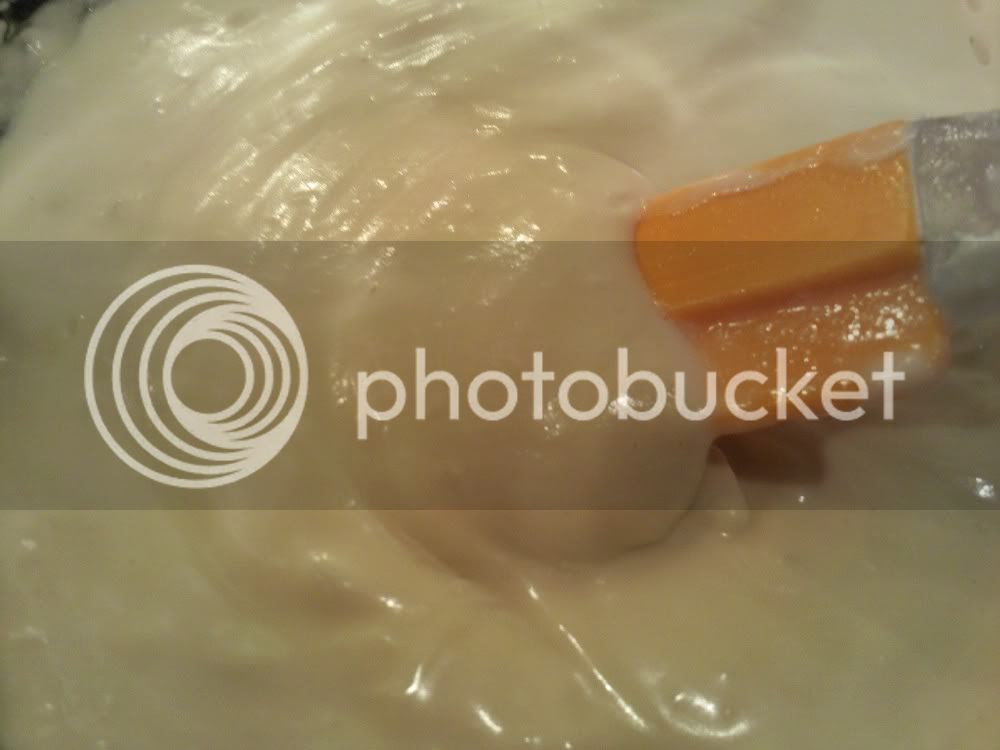 You can keep it in the fridge for AT LEAST a couple of days. HA! As if it's ever lasted that long around here. 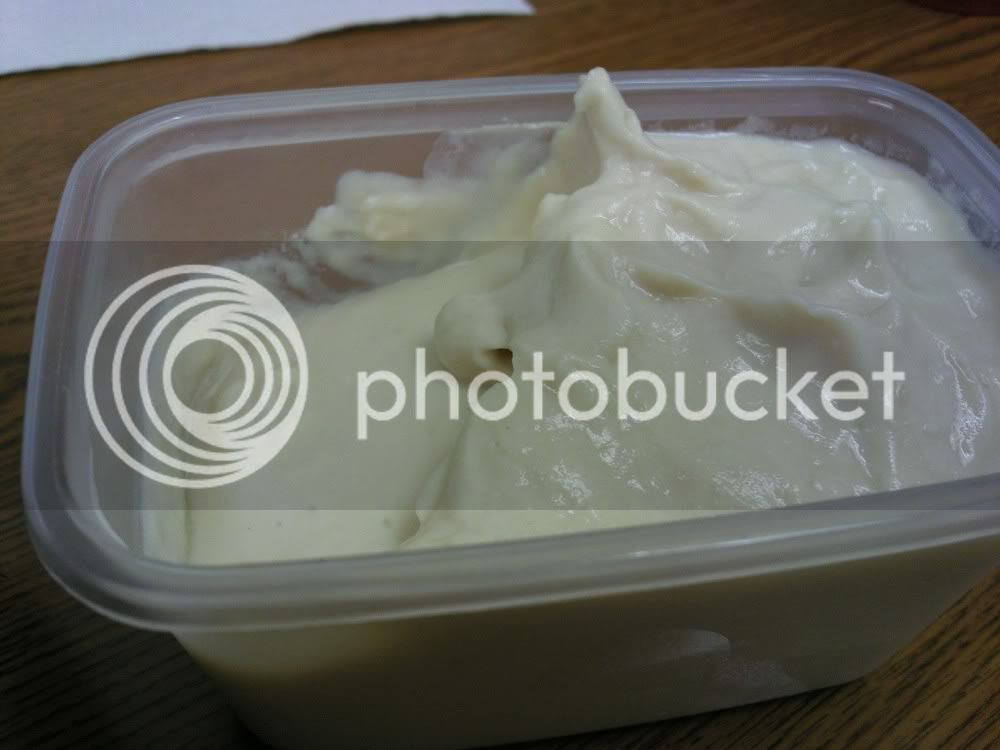 Well, that's it for me, I will leave you with a picture of the best-tasting turd-shaped item ever (educated guess): 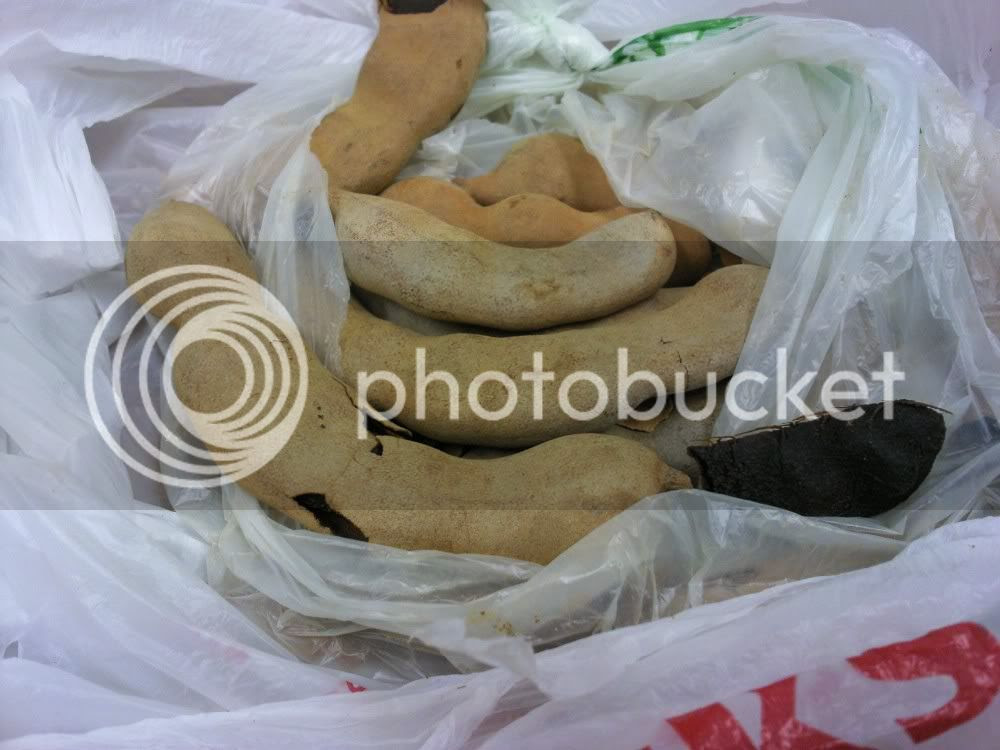 TAMARIND!!! Get it if you can find it. 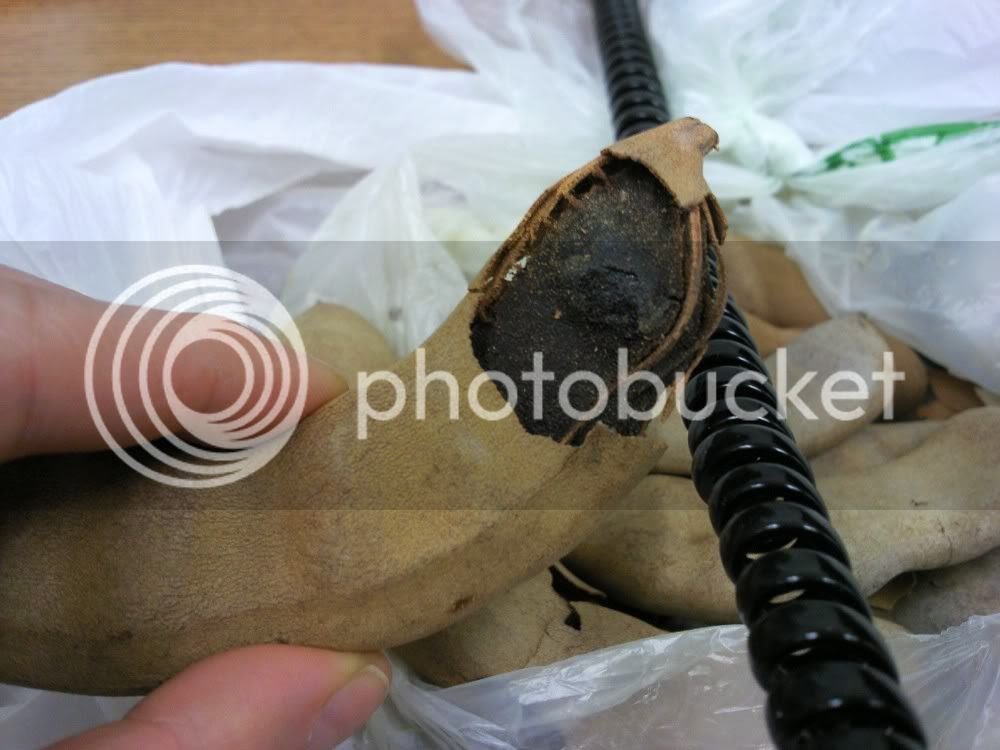 Seems all I keep doing lately is link to give-aways but gosh I can't help it -- there are so many good ones out there!